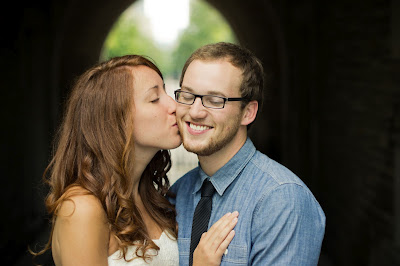 Thanks to Stauffer, my best buddy Ty - faithfully keeping this as his homepage for over a year - and my fiancé, Justine, and Katie - all for reading this once in a while. It was fun to have a little hobby during school and some page to reset my friends homepage to. School is over, so for now, bye. If I start a new blog I'll be sure to send the URL here. I've got some bigger fish to fry 5 hours west of the Greenwich Mean Time. Thanks for stopping by. If I can recommend one thing - try reading something more substantial than blogs. Try the Bible.
Posted by Scott D. Mckenzie at 12:24 AM No comments:

A Year With Whitefield: Scott's Snapshot 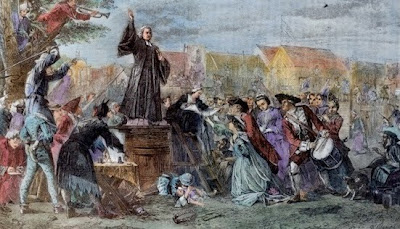 Since late April 2011, I started on volume 1 of Dallimore's Whitefield, and finished the appendices in volume 2 a week ago. It was an emotional 50 week ride. I've read barely any biographies at book length, this one knocked it out of the park. Even with the the occasional fallback in confusing the chronology from my slower pace, I learned so much about this forgotten man of God. Some say he was the Billy Graham of the 18th century. It's sad that the recounting of his life and times are not conversationally in vogue. In going upstream, I'd like to share with you a bio sketch of George Whitefield's life and preaching ministry that I comprised for a portion of my final term paper in Homiletics. There is also a portion specifically on his work in the summer of 1742 in Cambuslang, Scotland.

George Whitefield (1714-1770) is one of the greatest preachers in the history of the church. Dr. Squintum, as some ridiculed him, was the founder of Methodism. He was the first of the Holy Club at Oxford to be converted and to preach the gospel as a Christian. He stormed the fields of England, Whales, Ireland and America with the gospel of Jesus Christ. He was not a perfect man, but a godly one. And in God’s hands was used mightily.

George Whitefield was born December 1714 in Gloucester, England at his parents work, the Bell Inn. George was the youngest of seven children. As an infant he contracted measles; this seems to be the reason for his squint/cross-eye that would follow him in future portraits. George’s father died when he was two and his mother would not remarry until he was almost eight. As a boy he attended St. Mary de Crypt school where he learned his grammar and loved to perform plays; sometimes even mimicking girls in their clothing. He read many plays and by sixteen was reading the Greek New Testament. At eighteen he would attend Oxford College as a book boy for a senior student. Around September 1733 he joined the Holy Club where he would first meet his lifelong companions: John and Charles Wesley. In this group, George recounts practicing extreme spiritual discipline but never actually knowing Christ.

Whitefield’s conversion came when he was twenty in 1735. It appears that a book by the Scotsman Henry Scougal led Whitefield to Christ when it confronted him of his spiritual emptiness. During this time Whitefield became bed-ridden after fasting for six or seven weeks with the Holy Club. He had gotten so weak and sick that he could no longer walk up a flight of stairs. While recovering he cried to God: “I thirst! I thirst!” and then he came to trust Christ as Saviour.

Whitefield within the next year would be ordained as a deacon into the ministry of the Anglican Church. He would stress the same kind of conversion he now knew to all: one of the heart and the mind. His preaching of the new birth would be central to his ministry. To begin his ministry, Whitefield returned and preached his first sermon in Gloucester, at St Mary de Crypt; the same town he was born in and where he grew up and went to school. Whitefield continued to preach but the Anglican clergy in England did not like his stress on the new birth. He would soon be ousted from many parishes where he itinerantly preached. During this time Whitefield was soaking himself in Puritan literature. One of which was Matthew Henry’s Commentary on the whole Bible; which he would keep close by into his old age. His mind was being transformed from an early conversion through the use of his puritan forefathers and their depth of spirituality.

Whitefield wanted to get married originally to Elizabeth Delamotte from England, but she denied his proposal of marriage. This broke Whitefield and it took him years to get over her. He instead married Elizabeth James on November 14, 1741. Their only son, John, would die at four months. She would go on to have four miscarriages and nearly die herself in 1746. Elizabeth would die August 8, 1768, two years before Whitefield. Dallimore states that their marriage was “tolerably happy”, and that Whitefield did appear to miss her months later. It was not nearly as bad as John Wesley’s marriage, but unfortunately not as kindled as Charles’.

Much of his labours were towards his Orphan House, named Bethesda, in Georgia. The Orphan House would be a constant battle for Whitefield his whole life. From first founding it in 1740, to collecting money on his evangelistic journeys, to the constant debt of its maintenance, to staffing dilemmas, to communication delays. Whitefield was stressed and in a consistent sweat over the Orphan House being out of reach across the Atlantic. Yet it speaks to many the necessity he saw in providing for orphans.

Just five miles south-east of Glasgow sits the town of Cambuslang in Scotland. When Whitefield went there in the summer of 1742 he preached in a natural amphitheater to over 30,000 people; 3,000 who took the communion. Cambuslang, at that time, was known for the affect the communion services had had on God’s people. The pastors in the local towns before Whitefield’s arrival were preaching on regeneration. He came alongside the Scottish ministers and assisted them. One Monday, Pastor Alexander Webster and he preached and there was a great commotion of the people. Whitefield in his Letters writes on August 27: “Though it rained much, there was a great awakening… A very great and serious concern was visible throughout the whole solemnity. The Lord’s people went home much refreshed”. Whitefield after the meeting at Cambuslang on Monday August 16, preached from thursday August 19 to thursday August 26 in seven towns twenty six times: “I never preached with so much apparent success before”.

Yet Webster goes more in depth commenting on the day in his diary:
"During the time of divine worship, solemn, profound reverence overspread every countenance. They hear as for eternity, and not knowing but the next moment they must account to their great Judge. Thousands melt into tears. Many cry out in the bitterness of their soul."

During the last five years of his ministry, just before Elizabeth died, Whitefield took on Cornelius Winter as his personal assistant. Winter gives an excellent summary of what was typical of Whitefield’s sermon preparation in the last years of his ministry. He states:
"I never knew him engaged in the composition of a sermon…I never met with anything like the form of a skeleton of a sermon among his papers… nor did he ever give me any idea of the importance of being habituated to the planning of a sermon… I believe he knew nothing about such a kind of exercise… [h]e was accustomed to have Clarke’s Bible, Matthew Henry’s Comment, and Cruden’s Concordance within reach…"

One wonders if this extempore and excessive reading approach was typical of Whitefield. And if so, was it this manner of sermon preparation that the later C. H. Spurgeon sought to emulate from one of his favourite preachers? Whitefield would continue ministry in England, Ireland, Whales, and New England until his death. In 1770, he went to New England on his last missionary journey. His strength had been dwindling from his overexertion since 1761. Although he started to regain momentum while there, preaching upwards of three times a week again, it was short lived. He died September 30, 1770 in the middle of the night in Newburyport, Massachusetts.


Resources consulted, including Dallimore:
Dallimore, Arnold A. George Whitefield: The Life and Times of the Great Evangelist of the 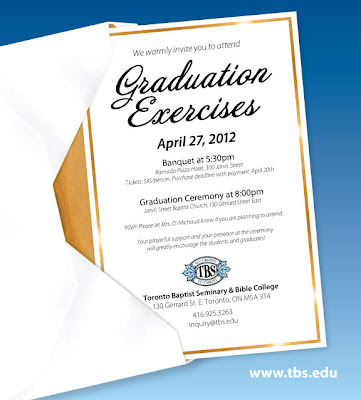 All welcome - come cheer us on
and eat the refreshments
Posted by Scott D. Mckenzie at 10:52 AM No comments:

There is therefore
now no condemnation
to them which are
in Christ,
who walk not after the flesh,
but after the Spirit.
Romans 8:1